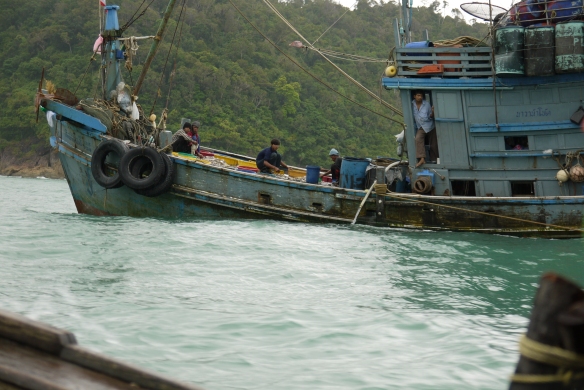 Migrant workers on a fishing boat on the Andaman coast of Thailand (Photo: Nathan Bennett)

Five years ago when working on several projects with the UN FAO’s Bay of Bengal Large Marine Ecosystem Project in Southeast Asia, I became aware of how the global seafood industry was rife with social issues (report). These issues included slavery, welfare and safety issues, child labor, inequitable access to resources for coastal communities, lack of consideration of small-scale fishers in decision-making and ocean grabbing.

Summary: Seafood is the world’s most internationally traded food commodity. Approximately three out of every seven people globally rely on seafood as a primary source of animal protein (1). Revelations about slavery and labor rights abuses in fisheries have sparked outrage and shifted the conversation (2, 3), placing social issues at the forefront of a sector that has spent decades working to improve environmental sustainability. In response, businesses are seeking to reduce unethical practices and reputational risks in their supply chains. Governments are formulating policy responses, and nonprofit and philanthropic organizations are deploying resources and expertise to address critical social issues. Yet the scientific community has not kept pace with concerns for social issues in the sector. As the United Nations Ocean Conference convenes in New York (5 to 9 June), we propose a framework for social responsibility and identify key steps the scientific community must take to inform policy and practice for this global challenge. More…